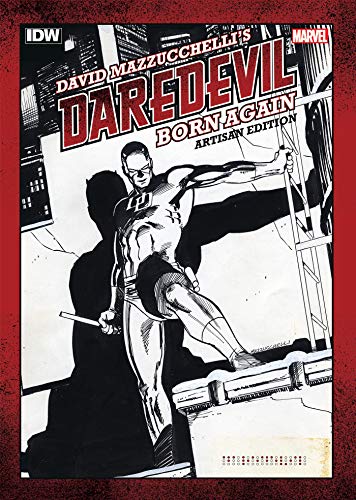 Reseña del editor Enjoy the acclaimed graphic novel as an ART BOOK! Each page of this classic story is reproduced from the original art--while appearing to be in black and white, the art is scanned IN COLOR, capturing all the nuances (blue pencil, white out, etc) and quirks that make original art unique!DAVID MAZZUCCHELLI'S DAREDEVIL BORN AGAIN was released in the much lauded Artist's Edition format in 2012. It soon became the best-selling Artist's Edition of all-time and was universally acclaimed. In 2013 the book received the prestigious Eisner Award for Best Archival Project--Comic Books, as well as a Harvey Award the same year. It soon sold out and has been the single most requested AE book to date for IDW to reissue. So it is only fitting that IDW launch its new MARVEL series of Artisan books with this award-winning classic! Just as the original release, DAVID MAZZUCCHELLI'S DAREDEVIL BORN AGAIN ARTISAN EDITION features the same scans--entirely from the original art--each painstakingly done by David Mazzucchelli himself to ensure the finest quality possible. If ever a book deserved to be in this format it is Daredevil Born Again. Frank Miller, at the peak of his powers, crafted a story that remains--in an extraordinary career--one of his finest pieces of writing. And David Mazzucchelli does a stellar tour de force job as his collaborator, providing a nuanced and nearly pitch-perfect turn as artist. If there is any book deserving to be re-read and rediscovered... this is the one! Biografía del autor David Mazzucchelli has been making comics his whole life. Known chiefly for his collaborations - with Frank Miller on seminal Batman and Daredevil stories, and with Paul Karasik on an adaptation of Paul Auster's novel, City of Glass - he began publishing his own stories in 1991 in his anthology magazine, Rubber Blanket. Since then his short comics have been published in books and magazines around the world and Asterios Polyp was his first graphic novel.