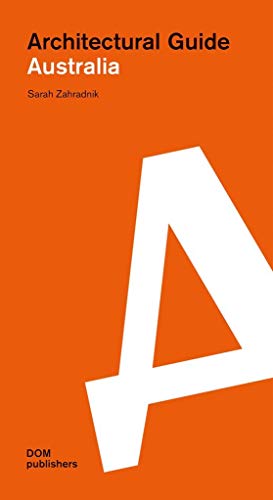 Reseña del editor The Architectural Guide Australia presents over 200 projects in the vast island continent that is home to natural wonders, coastal settlements, and tropical climates up north. Each chapter, dedicated to one of the nation's eight state capitals, presents buildings that represent the major moments in the country's architectural history, from its colonial origins to the contemporary era. The book includes a short introduction to Australia's most influential architects as well as essays by Harry Seidler, John Gollings, and David Bridgman. Seidler's essay argues for the incorporation of sunlight and -shadow, phenomena so distinctly characteristic of the country's climate, into architectural design both from an aesthetic and practical standpoint. Gollings offers a historical sweep of Australian architecture before identifying the three major architectural strands of contemporary Australia. Bridgman explores the challenges of designing in the hot-humid tropics in particular, outlining the climatic considerations that must be accounted for when building in those regions. Each chapter also includes an interview with a prominent architectural practice active in the respective city. The architects offer their views on the characteristics of Australian architecture and comment on their own practice within this context. With its comprehensive map, aerial photographs, and array of images, this book is the ideal companion for those exploring Australia. Biografía del autor Sarah Zahradnik is a German born ­Australian Architect. She graduated from the University of South Australia with a masters in Architecture. Since then she has worked in offices in Australia, ­Brazil, Mexico and Germany. She is ­currently working in an architectural office in ­Melbourne.