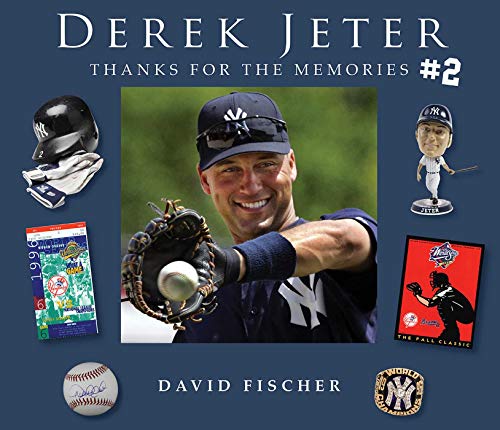 This book commemorates The Captain’s” career in pinstripes through words and images. David Fischer traces Derek Jeter’s legendary baseball career, from his early minor-league struggles, through his exhilarating days as a Yankees superstar, to his status as an enduring symbol of the steroid-free athlete. Indeed, Jeter’s intangible ability to play at a high level in the postseason makes him the face of the modern Yankees dynastyand of America’s national pastime. Fischer makes clear that Jeter walks in the footsteps of other Yankees greats such as Ruth, Gehrig, DiMaggio, and Mantle, and that someday his shadow will loom just as large.

The author celebrates Jeter’s career in a fully illustrated, scrapbook-style album with passionate and vivid prose, supreme photographic images and memorabilia, call-out quotes, and dozens of personal anecdotes and recollections about Jeter from prominent members of the Yankees organization and the New York community. Treasures from the Baseball Hall of Fame and the Yankees Museumrarely seen photographs and artifactsenhance the nostalgic experience. This unique collection captures the magic of Derek Jeter, making it an essential addition to every Yankee fan’s library and a fitting tribute to one of the game’s greatest players.

Skyhorse Publishing, as well as our Sports Publishing imprint, are proud to publish a broad range of books for readers interested in sportsbooks about baseball, pro football, college football, pro and college basketball, hockey, or soccer, we have a book about your sport or your team.

Whether you are a New York Yankees fan or hail from Red Sox nation; whether you are a die-hard Green Bay Packers or Dallas Cowboys fan; whether you root for the Kentucky Wildcats, Louisville Cardinals, UCLA Bruins, or Kansas Jayhawks; whether you route for the Boston Bruins, Toronto Maple Leafs, Montreal Canadiens, or Los Angeles Kings; we have a book for you. While not every title we publish becomes a New York Times bestseller or a national bestseller, we are committed to publishing books on subjects that are sometimes overlooked by other publishers and to authors whose work might not otherwise find a home.