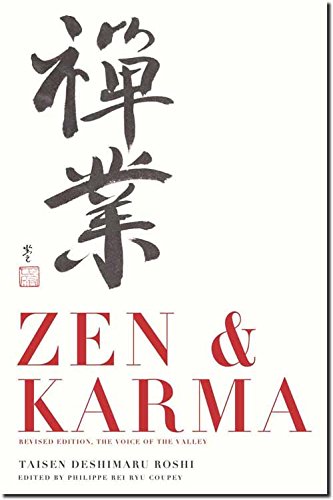 Taisen Deshimaru (1914-1982) was a Japanese Zen Master, and the individual largely responsible for bringing Soto Zen to Europe. A legendary figure, widely acknowledged throughout the Zen world, he stands in the ranks of the great Zen teachers of modern times, including, Suzuki Roshi, Maezumi Roshi, and others. This second edition of his book The Voice of the Valley, first issued in 1979, contains the pure Deshimaru vintage-teaching. Uniquely, it is one of the few Zen books treating the subject of karma, a principle deeply entrenched in Hindu and some Buddhist traditions, but rarely taught within Zen. Karma generally refers to the principle of cause and effect, acknowledging that each individual will “reap what they sow,” whether in this lifetime or some future life. Deshimaru, however, explains that this doctrine really has nothing to do with a simple good or bad balance-chart for the individual person, but rather concerns the activity of humanity as a whole. He highlights the necessity for clearly seeing one’s own thinking, which is creating the hell that we and others endure?an immediate karmic payback. With zazen, a practitioner becomes not only acquainted with the contents of mind, but able to refocus it, allowing the body to “think” in ways that are beneficial to oneself and others. As he compares this doctrine of karma within Mahayana Buddhism with Western philosophy, he points to the need for wise and ethical action in all aspects of life. His dedication, like that of great masters in all traditions, is with the relief of suffering and the clarity needed to pierce to the cause of suffering. Serious sitting practice, in the way he presents it, creates that access. The book is a live record of the Master’s teaching content (kusens) and his style of presentation during a practice sesshin (retreat) of several days. Deshimaru spoke in English, and his words were recorded and compiled from notes taken by the editor (Coupey) and other students. His subjects are as timely today as they were in the late ‘70s. At a time when contemporary Zen practice has been co-opted by the culture of “new and now,” his teachings do not compromise. This is no self-oriented “wellness Zen” cultivated for feeling more relaxed. This is the real deal, a call to a stark, “no-gain” approach to clear perception of reality from one who studied and practiced this tradition fully aligned to its source. As such, this book is a precious vehicle of direct transmission.